I really don’t like pointing the finger, but this company just approaches social media in such a horrible style, that I want you all to see how NOT to do it. First of all, they advertise with social media services. Now, the funny thing is, that they have a facebook link at top and left of their site, with different like amounts, confusing the user? Hell yeah. Second, you can’t “find” them on facebook, because their page-name only directs to nyndesigns.com

On twitter, a couple of messages (often the same) sprouts up by multiple people.Â What could be going on here, is that a bot with some random people-stock pictures is tweeting all their pre-defined news messages over and over again, none of them responds when you tweet at them, neither the @nyndesigns account. I assume these are blind bot accounts, because they tweet the same messages over and over again, trying to over-over-advertise for the posts and services of nyndesigns.com

The funny thing is, that Nyndesigns advertists with a message like:

Which does not add up with their behaviour on social media at all.

ground rules they are breaking:

Below you see the confusing different amounts of likes on their facebook page:

UPDATE: I just filed a spam report on twitter.com about this matter, including the information above.

I just received a mail from Nyndesigns and actually the difference of facebook likes was explained to me as for one the likes on the page itself and the other amount is for the facebook page. I was accused of not understanding technology like the open graph API of facebook, (stupid me). Well my point remains, that there actually is no facebook page, but it merely is set to redirect to nyndesigns.com, which I consider a bad use of social media. Maybe I really am doing it wrong, but when I search for the company name on facebook and click the only result, I get redirected. The only way to access it for me, is to visit the url, that was sent to me in the mail directly:Â https://facebook.com/nyndesigns

That is except Also admitted in the mail was, that they don’t use social media to communicate with clients, apart from maybe linkedin, (as an explanation why nobody cared about my tweets ;)).

Also the army of tweetbots is justified by, that many parts of the industry do it and that it’s offered as a service to clients. Now I don’t know how big parts of the industry are defined, but this is the most annoying and also the only that was not emitted by some scam company for shady sites, that I’ve ever seen.

Eventually, I was asked to remove this post (I guess my search engine ratings are too high and that’s something they had to react on, in contrast so somebody just tweeting at them).

A client is an application you use twitter through. A great example for that is tweetdeck, because it has multiple columns and you can get it on Windows and MacOS, because it is written in Adobe AIR. I like to keep track of my friends timeline, my mentions and a facebook newsfeed. The fourth column changes between different lists and searches. 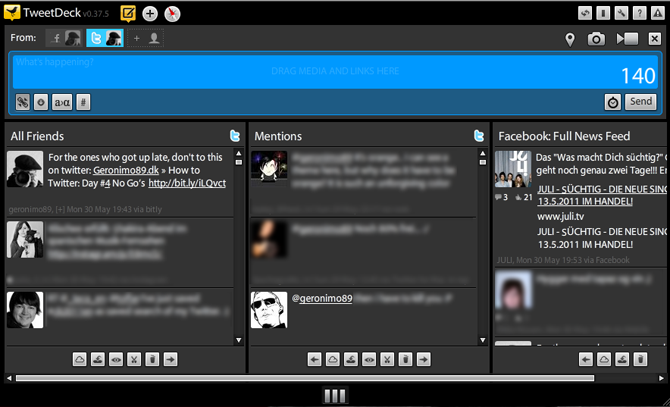 If youâ€™ve been tweeting and including links in your tweets, you may have noticed that links take a big chunk of the overall tweet length, which is limited to 140 characters after all. Link shorteners will be your friend. There are multiple services for that out there, I personally use bit.ly, because it’s widely spread and easy to integrate to tweetdeck or available as a plugin for Chrome/Chromium.

There are different tools for analyzing your or others accounts. A service which is fairly new and very powerful is Klout. It calculates how you impact twitter with your tweets upon how much reaction like mentions or retweets you produce. It also analyzes your style, if you mostly tweet links, mention other users and so on. There is a ranking plugin available for Chrome to see other peoples Klout score directly on the twitter website. 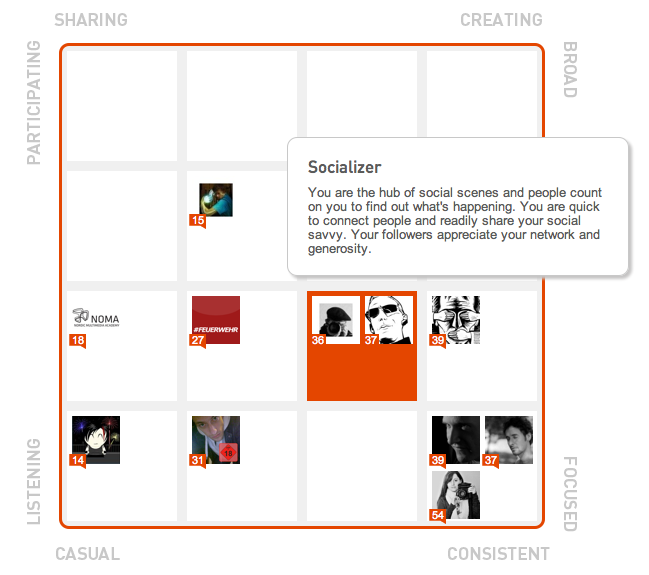 These were the first five days of How to Twitter. If you have any questions or suggestions, feel free to comment

Thanks to everybody who followed through so far!

donâ€™t kill it with boredom.

Itâ€™s been a long time since my last status update, so here we go: looking for breakfast.

When youâ€™re a blogger, you should add some personality to your blog, thatâ€™s correct. If you donâ€™t have a blog and are worried that your twitter account has some spider webs on it, use it as motivation. Get up, do something, tweet that.

Of course it is, so donâ€™t retweet somebody a lot of your followers are following, it will just annoy them and flood their timeline.
Furthermore, donâ€™t link the same post/site twice without telling you have tweeted it before. Include a memorable title, or users will be disappointed the second time they visit one of your links, they believed to be new.

All you miserable maggots will bite to dust and I’ll impale you with a bamboo stick!

If you try to stand out as a professional, discuss, donâ€™t harass. What you tweet about is very sensitive. Donâ€™t tweet that you hate work, when you just got hired by a firm and you have no side-projects, donâ€™t put a bounty on peoples head, imagine your audience sitting in front of you. To get away from you, they just have to click unfollow instead of leaving the room and giving you the possibility to question why, like in the physical world.

Don’t whine too much. It’s very irritating to see people bitching around all the time. To be on the subject and being still critical is not impossible

This is a lot depending on what you want to achieve. A podcaster I follow uses twitter to organise with the people he meets around Germany. Others promote their newest content, their firms launched products, etc. Iâ€™ll just leave out talking about puppies or that you just had breakfast, because these you should do rarely, if youâ€™re not breeding dogs or a dedicated food blogger.Â  Your bio(graphy) is also important, so potential followers get a quick overview, what theyâ€™re going to read when they follow you. Iâ€™ll just use my current as an example:

PhotoDesignCode-Junkie, currently at the Nordic Multimedia Academy. Free for shootings and projects, speak to me in: EN/DE/DA. Follow me for more insights.

I consider it short, summarising my interests, revealing my current occupation, that Iâ€™m open for work, trilingual and inviting to follow me.

Try to connect with people you know in real life, people from the same area or field of interest. This will give you opportunities to jump into conversations, help or just get interesting updates. As this is a medium that leans so close against the pulse of the net as no other, being there when something happens or at least on a daily basis, you should make routine out of checking your account, mentions and retweets on a daily basis.

There are a couple of good answers. Most business people will now be looking for a combination of â€œwillâ€, â€œincreaseâ€ and â€œsalesâ€, but itâ€™s not that simple. If you do it right, it might create a better relation to your customers, empowers you for more direct communication and that also only if your target group uses twitter. Furthermore will it not help throwing out random links to your homepage or products, if it is not new, relaunched, changed, or in a conversation. Sounds easy? No, but thatâ€™s why there are multimedia designers like me

As a private user you can promote your private projects, network close and instantly with friends or . BOOOORING. At least the last.
If you, like me, are becoming a multimedia designer, study something in relation marketing, no matter if it is internet related or not, you definitely should have a Twitter account. If you ever, possibly by a client, boss, co-worker or a just a possible client at a party at very unlikely circumstances could be confronted with the question: â€œWhat about social media?â€.
Sounds like itâ€™s never gonna happen? Donâ€™t think so. Iâ€™m not a god of social media and I donâ€™t even have a lot of followers, but my count is growing (feel free to follow if you find the first peek at my time line interesting :)).

I use Twitter connected to other social communities which makes my tweets, apart from retweets and mentions visible on for example facebook. When I find something interesting or funny, that my friends could like, I tweet it, if I find it has not been seen, is brand new or just legendary. Furthermore I tweet new blog entries (more in depth about new things or things new to me) or portfolio entries with sets of photos, posters or code snippets.