I have a dream (transb.in)

I have a dream about yet another web project and I’m now going to present what it’s going to be. 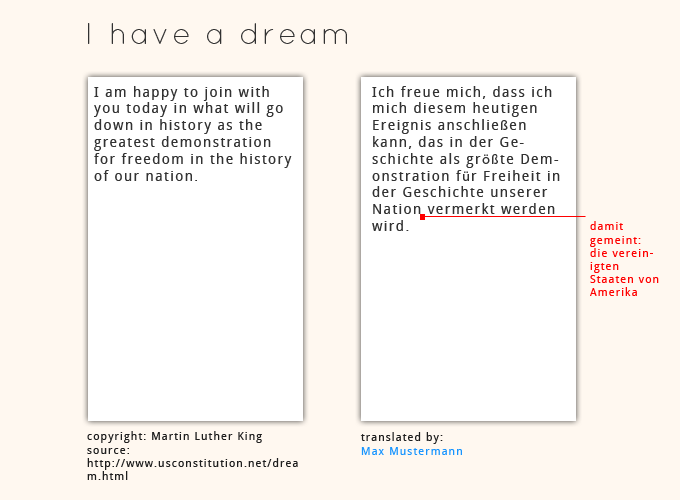 It will be an online interface for easily translating texts and adding annotations. EDIT: The website will not auto-translate anything, the users will be able to translate texts.

Why is it called transb.in?

Basically, because there are many “pastebins” for code out there like pastebin.com, but this one is going to show texts side by side, in their original language and the one they are translated to.

First of all, I do. I think it’s much more pleasant if the texts you are trying to understand in a foreign language appear side by side (original/translation) so you can pick up some of the twists in the authors original version. Thinking from poems or songs, over speeches to any kind of written material, people may not be able to understand without a translation.

Second of all, it may be a help for anybody who translates texts, for wikis, documentations, tutorials or different material.

Why will this be better?

It will be better, because the method of displaying texts is much more natural for people who want to compare the translation to the content of the untouched text. Also annotations within the texts (like in MS Office or Open/Libre Office) will aid the user in understanding the meaning a lot better than only the interpretation of the primary translator.

On top of that, users will have the option of translating the text into another language and make itÂ accessible for even more people, adding to the list of available languages, like on Wikipedia/Wikiquote, etc.

Â When will this go live?