What really makes me throw up about Apple and Adobe 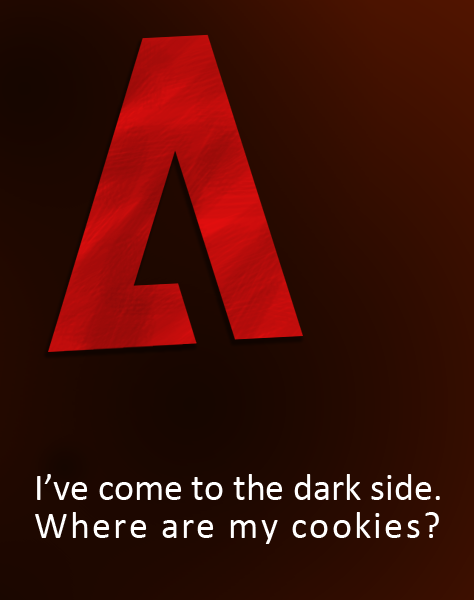 Not liking, even though I use them

Right now, there’s a big change in my daily life and that is using Apple and Adobe. I’ve used their technologies before, I was given an iPod (I installed Linux on) and I used PDF (which I either viewed or created with open source software). Now I am studying multimedia design and I’m using Adobes Creative Suite CS5 on my MacBook Pro. This is pretty tough for someone who actively chose to use Linux and open source software nearly exclusively.

So why the hell do you use it now?

Because I have accepted, that it’s industry standard and the market for designers on open platforms is pico (expression for small).

What’s so bad about them anyways?

They drive their monopolistic strategy out on people who have not done anything to deserve it. Apple sues programmers (keyword: jailbreak)Â who extend their hardware and wants the user to have no control over the product they buy. They want you to use it the way they want. They’re stepping back a little from that philosophy now, but only a tiny bit

Adobe holds its cold embrace around the internet, since they started implementing proprietary formats like Flash (I know, it started with Macromedia until they got bought).

Software patents in general are a big part of my antipathy.

What are software patents?

Software patents are a way to make money on nothing for big firms. They proclaim the right to be the exclusive distributor of a certain feature in software. A popular case of this is Microsoft claiming a patent on the double-click. You may say: Why not if they did invent it? Because it’s not complex enough. Imagine programs as math formulars, you can’t claim patents on them either. Example: I claim the Patent for PI and you had to buy licenses from me to calculate circles. Example two: I’m the first to grill spare-ribs with honey-parmesano marinade and I would sue you for trying the same, doesn’t sound reasonable, does it?

What would applying software patents mean if they were approved?

That you rarely could use any piece of software any longer. Just imagine that double-click thing. Which program does not support that? Further developers of important pieces of software that pretty much keep our modern infrastructure running would be sued and maybe drop their work, examples: PHP, MySQL, Apache.

Are you kidding me? There would be no facebook, Firefox, VLC or OpenOffice.org?

Open source software is based upon the thought of receiving and giving back. It works quite well for a lot of companies, before you start asking how they make money with that. They often don’t sell the software itself, but support contracts. Examples on that: Novell, Red Hat. An important keyword here is the GPL, the General Public License. It states, what is released under it, is free and if you use or enhance it, that also should be free. Over 5 years ago I switched to Linux and used Windows when I wanted to play games that were not developed for Linux. Switching back to proprietary software for me is quite a deal, because it means being tied down to 2 platforms and a few Adobe products.

What can I do against software patents?

There are various sites on the internet, but if you’re living in the EU, you should sign the petition at stopsoftwarepatents.eu