My Linux journey so far 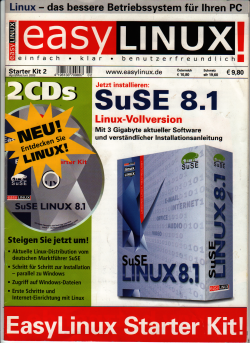 I just found the magazine with which I got my first Linux CDs, so I thought I’d throw out a blog post about it.

I’ve started experimenting with Linux at the age of 14 in 2003 I think. I don’t remember exactly, had to check when SuSe Linux 8.1 came up, which I started to install on my first decent own machine. I’ve had been using computers since before my third birthday. My father allowed me to play some old DOS games on his computer back then. Later I started experimenting with a computer with Windows 3.11 and later Windows 95. I never really missed anything, because I mostly played games until I more and more read of Linux in various computer magazines.
I was a fan of share- and freeware and the concept of open source started to catch my interest. Since 2003 I’ve tried a lot of Linux distributions and various versions.
I had shorter installations of Knoppix, Mandrake or Suse and longer ones with Kanotix, Debian, Gentoo or Ubuntu. Right now I’m mainly using Sidux on my Laptop and mainstation because I’m basically a Debian fan who just loves apt but likes the scripts delivered by the Sidux team.
A saying I believe in, concerning distributions is: Ubuntu for users, Debian for servers, Gentoo for insanes. I don’t know if meadow is the creator of this saying, but if so: credits to him.