My wonderful girlfriend Julia <3 organised a trip to London. I enjoyed the time with her and want to share what we did and throw in a few photos

arrival, saturday
Our flight left early from LÃ¼beck and got us to London without unsuspected events. From Stansted Airport we took a bus to Liverpool street and from there we walked to our hotel. It was a pretty long way,but the weather was nice and the sun shining.

the mind of a genius, sunday
The DalÃ­ exhibition was enormous. I didn’t count the works, but the ad
claimed there were over 500 and that shouldn’t be a lie. The audio guide
was nice too, only DalÃ­’s comments were totally random and could have
been cut out without being missed. 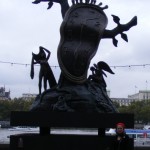 scare the shit out, monday
Monday we walked by St. Pauls Cathedral, the Tower Bridge, a wonderful piece of streetart and visited the London Dungeon. A mix between pepped up historyand horror show. When we just entered the dark gaol where it is set, I scared the shit out of Julia so she even was a little more scared than
she was anyways. The actors in the dungeon from time to time drag
visitors into their show. I happened to mention, that the girl next to
me might want to join in the lesson about torture in the torture
chamber. She was taken in front of our group of about 30 people and
various torture techniques were demonstrated on her (not painful, just
to make them understandable). The funniest part was when she was told to
bend over and she didn’t understand and blushed like the back light of a
car :). She finally did and the torturer could demonstrate all the ways
you can hang prisoners on a hook :).

still monday
After visiting the dungeon we visited the Tate gallery of modern art. The exhibition in the old turbine hall of the facility reminded me a lot of huge harvester from the matrix. It’s a model of giant spider over a lot of empty beds without blankets or pillows, just books in them. 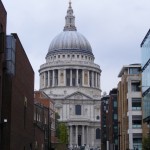 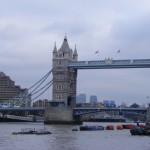 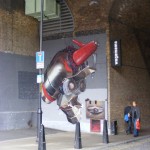 animal feeding (tues)day
Tuesday we were running around a lot in the Hyde Park, Julia feeding or trying to lure the squirrels, me taking pictures of it. Afterwards we saw a bit of marching, guarding and the Buckingham Palace. 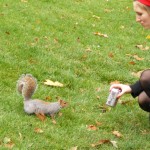 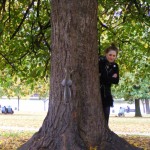 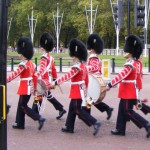 by night, still tuesday
I managed to get a few good shots of the london eye by night. It was a
bit windy so I had to take some shots to be satisfied with the results,
but after all I was pretty happy that I had my tripod with me. 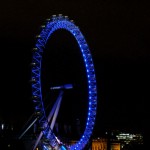 museum overkill, wednesday
Wednesday we visited the British Museum. A lot of the exhibited objects were stunning a lot of ancient culture. I especially liked the installation Cradle to Grave by Pharmacopoeia. It shows the pills people take in their lives with some examples. 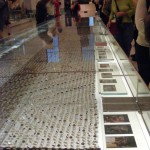 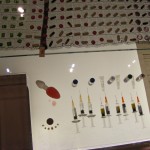 Saatchi n’ walk n’ tube, thursday
Walking to the Saatchi gallery and taking the tube back was basically thursday without leaving out a dog show, taking a massive amount of pictures and looking through various shops. 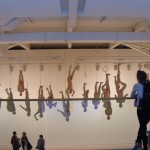 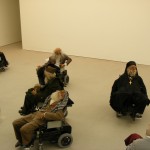 Random stuff: There were NERD CafÃ©s. Julia always insisted, they were “Nero” or some kind of thing, but how should she know!? Another thing is that Britains really must be barbarians. Who would kill orcs? Such peaceful and civilised creatures… 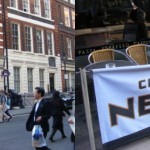 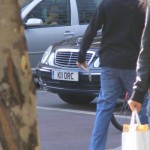 The best thing about this whole trip was: Walking around with the most lovely girl of Britain <3.